The Marlay Point Overnight Race was initially discussed at a general committee meeting of the Lake Wellington Yacht Club in August 1968 as an attempt to foster interest in night sailing for yachtsmen.

From this meeting the initial ideas were drafted into the “Marathon Inland Yacht Race” to be raced over the long weekend in March 1969 starting at midnight at Marlay Point and finishing at the Metung Yacht Club.

The line honours winner in the first race was a Flying Fifteen ‘Reliance 11’ sailed by Bill Shand and the handicap winner was a Hartley TS16 ‘Saetta’ sailed by Reg Hill.

‘Saetta’ continued her successful career into the mid-nineties and Bill Shand went on to a brilliant era in the Flying Fifteens.

Until 1976 the course was from Marlay Point through McLennan Straits into Lake Victoria and onto Paynesville and McMillian Straits and through Lake King to Metung.

From 1976 various courses finished at Paynesville where the on-shore facilities could cater for the growing numbers. 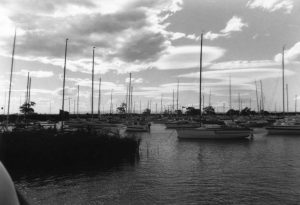 The halcyon days of the high-rolling eighties saw a booming trailer sailer industry. The Marlay Point entries of 680 in 1987 made it arguably the largest yacht race in the world. 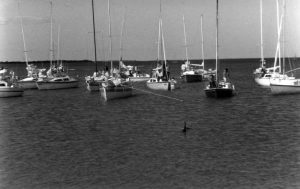 During the eighties a decline began as a succession of heavy-weather races, more stringent safety requirements and changing economic times took their toll.

In the new century with entries less than 200 a period of consolidation was needed so courses and starting times have remained the same for several years.

Over the years LWYC established an enviable reputation in running a professional and safe event. Two races, 1975 and 1988 were postponed to the following morning and in the record entry year of 1987, after several postponements, the race was cancelled. 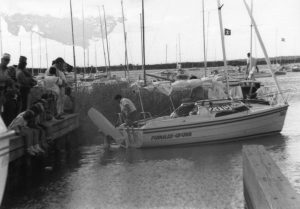 Since 2012 entries have been less than 140 and a couple of very light races proved challenging for the competitors and officials.

Given the low entries and a decline in workforce numbers, in 2013 LWYC conducted a major review into the future of the Marlay Point and resolved to continue, especially given the great support from APC Logistics sponsorship.

With a milestone event occuring in 2018 and naming rights sponsorship from CH Robinson, LWYC was determined to carry on the Overnight Race and in 2017 a more formal arrangement with the Gippsland Lakes Yacht Club was established with a view to them taking major responsibility from 2019 onwards.

LWYC and GLYC look forward to this partnership and the continuing support from the sailing community to ensure the Marlay Point Overnight Race continues.